Complete Car Cosmetics, established in 2007, is more than just a traditional bodyshop. We specialize in offering solutions far beyond that expected of a traditional repairer.

Within our premises in Derby, we deliver a tailor-made repair service to both trade and retail clients that not only encompasses a wide range of cost-effective (smart) repair techniques, but also has the facility to carry out larger repairs.

We believe in developing relationships with our customers, providing individual solutions for vehicle owners that appreciate their vehicles appearance and also wish to maintain its future value. 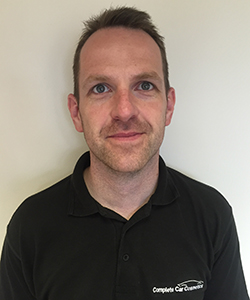 Karl is a fully qualified and registered A.T.A Accredited senior paint technician, this qualification demonstrates both Karl’s and our commitment to the quality of our finished product.

All his certificates can be found being proudly displayed in our customer reception area.

A perfectionist in paint and polish, Karl is very capable of applying his knowledge to ensure a flawless finish in all his work.

Karl has 22 years experience, 18 years within bodyshops, 8 years as an ATA senior paint technician, gaining experience and qualifications whilst working at large dealership based bodyshops as well as smaller independent repair centres. 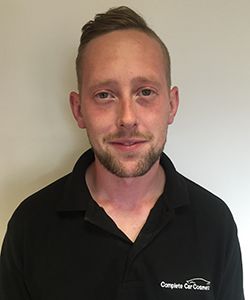 There’s not a lot that we throw at Dan that he can’t handle, an absolute wizard with our specialist dent pulling equipment and a master craftsman at shaping filler.

Dan is also highly experienced in the removal, fitting and re-aligning of body panels.

Dan’s hobbies include: family activities, football and relaxing with a cold drink! 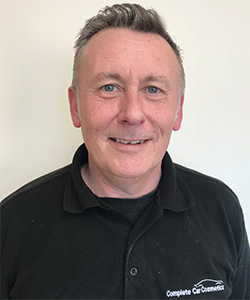 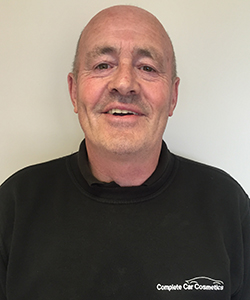 Ray is a key member of our team who whilst taking his job seriously, also brings a lighthearted bit of fun and humour.

Quite often Ray will collect / drop off customers and the feedback we receive is great, everyone loves Ray!

One of his responsibilities is ensuring vehicles are valeted before being collected, the finishing touch is incredibly important to us and Ray prides himself in his standards.

Ray also maintains our workshops, ensuring everywhere is kept spotlessly clean from wall to wall, the floor well swept, bins emptied and everything in its correct place.

Ray’s hobbies include: spending time with the family, playing cards and holidaying. 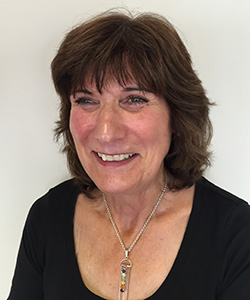 As a family business we like to involve our family, Isobel is Sarah Nelson’s mum.

Isobel comes in twice a week to keep our customer reception and canteen areas immaculately clean.

Our customers and visitors often comment upon the standards of presentation.

Isobel takes great pride in her work and enjoys being part of the team. 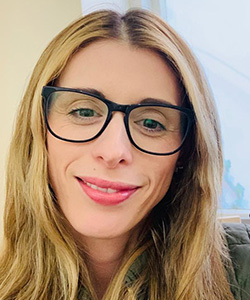 Sarah has been heavily involved with Complete Car Cosmetics since the inception and has also been in the motor trade for many years, working with high-end brands such as Audi, Mercedes and Lexus.

Sarah has a great eye for detail and is responsible for areas such as: 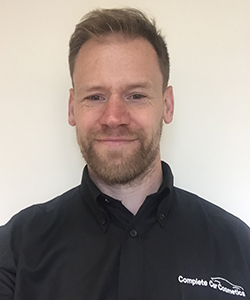 Chris has a great passion for Cars, motorbikes, bikes (anything with wheels really) and from a very young age, has always been obsessed with them!

At 16 years old Chris was thrilled to begin working in the motor trade as an apprentice at the Derby VW / Audi dealership in 1991 and was right in his element.

After completing his apprenticeship, the next 7 years were spent at Toyota Manufacturing UK, repairing bodywork on brand new vehicles to a very high standard, gaining recognition in specialist areas such as paintless dent removal.

Not the biggest fan of the night shift, it was time to move back into the accident repair business and the next 8 years were spent working his way up the ladder to become business manager at a prestige bodyshop.

In 2007 Chris finally decided it was time to start his own business and that’s when Complete Car Cosmetics was born.

Even through the 2008 recession the company has seen consistent growth, unrivalled quality of service and finish being amongst the business’s core philosophies.

Chris manages the day to day running of the workshop, estimating and direction of the business.

No matter what you drive, we understand your car is as much a necessity as it is a luxury.

To ensure our service causes no inconvenience whatsoever, we can supply you with one of our own courtesy cars whilst your car is being repaired*.

All our courtesy cars are:

Located close to Derby City Centre with good links to the railway station and major routes such as the A50, A52, A38 and M1. We are conveniently placed if you wish to go to work or carry out some shopping while your vehicle is with us.

We also offer a local collection and delivery service for which we are fully insured to drive your vehicle.

To minimise any inconvenience whilst repairs are being carried out, we offer a free courtesy car to all customers.

Our customer reception lounge has a comfortable seating area with coffee, tea and soft drinks available.

Minor repairs such as paintless dent removal or windscreen chips can be carried out while you wait although we usually need to book the vehicle in, in advance.

For your peace of mind all vehicles are completely secure in our care, the workshop is surrounded by a high fence, insured, alarmed and monitored with full CCTV throughout the entire building. 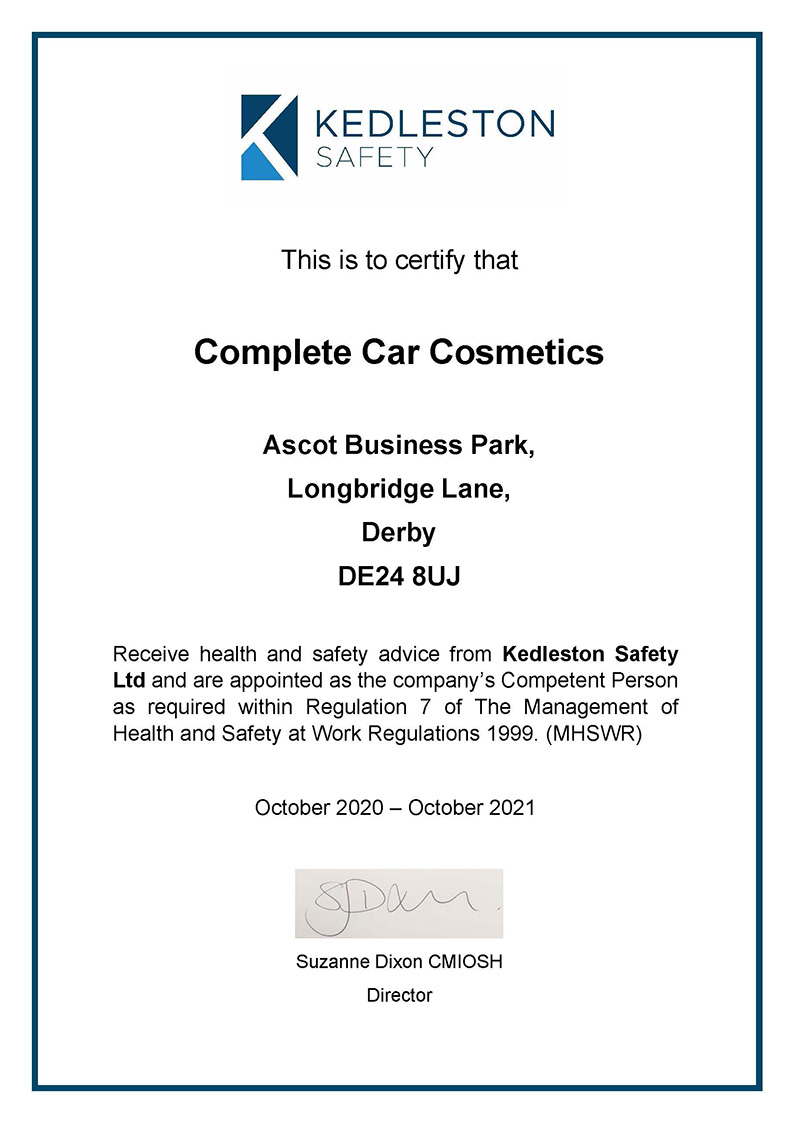 I always use Chris and his great team at Complete Car Cosmetics because the workmanship and professionalism are second to none; they’re the only body shop I trust with my car.

Once again they have done a magnificent repair on my...

what a fantastic team of professionals, highly recommend, made a fantastic job of my car, one very happy customer thanks Chris and team

I can highly recommend this company. A warm welcome, efficient communication regarding the quote and booking in was easy. A thoroughly professional job on our Audi, it looked brand new, definitely no corners cut here. Cleaned inside and out to a very high standard, the...

These guys are great.

They added a spoiler, splitter and side bars to our T5 as well as mending a damaged bumper and respraying the back doors and changing the badges.

Lease Car, Company Car, or Own Car?
WE CAN SAVE YOU MONEY!

Any make gets a Lifetime Guarantee

Our team of highly skilled technicians are all fully qualified and experienced to carry out paint and body repairs to any make and model of vehicle including prestige cars such as Aston Martin, Audi, Bentley, BMW, Lexus, Mercedes Benz, Range Rover, Land Rover, Porsche as well as volume brands such as Chrysler, Citroen, Ford, Hyundai, Isuzu, Mazda, Mitsubishi, Nissan, Peugeot, Renault, Seat, Volvo and VW.

We are so confident in our products, processes and standards that we offer the ultimate reassurance by placing a LIFETIME GUARANTEE on all of our bodywork*.

Complete Car Cosmetics, based in Derby less than 10 miles from the M1. We specialize in repairs to bodywork on all types of vehicles including cars, vans, motorbikes and motorhomes.